Visual Illusions – The University of Edinburgh

Also See: Visual Illusions with The University of Edinburgh 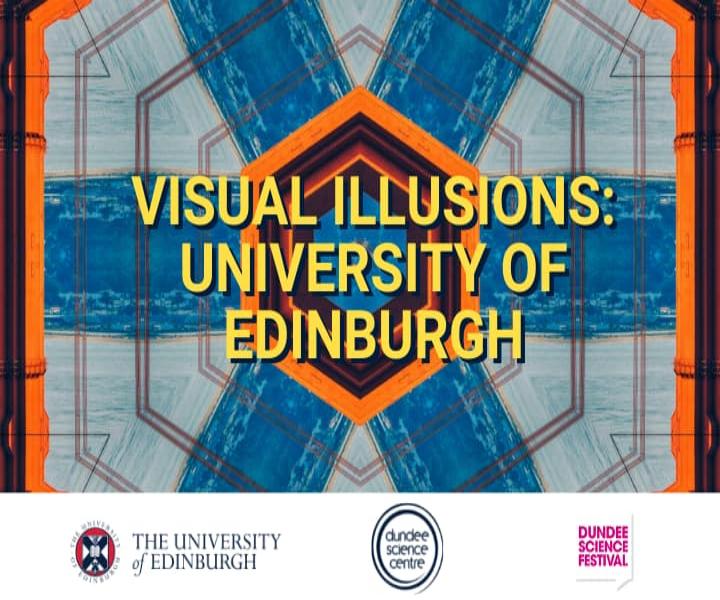 As children, we were all fascinated by visual illusions: look long enough at a relatively simple coloured pattern and then gaze onto a white wall and you will see all the complementary colours to the ones you initially saw – black instead of white, yellow instead of blue!

Here’s a Scottish flag for you to try this out yourself – look at it and count slowly to 20, without making eye movements or blinking, then look at a white paper or a wall. Did you see a black cross in a yellowish field?

Where do these after images come from? It is logical to assume that they come from somewhere within our brain – for where else could they come? But if they come from the brain, than they could be telling us something really important and interesting about how our brain works. In this sense, thinking about visual illusions allow us all to be vision scientists, at least for a wee while!

Let’s try and think about the colour after-effects we’ve just experienced. If white appears yellow after looking at blue for a while, what does this tell us about our brain? Well, first it means that the firing of our neurons in response to colour is not absolute – it is relative to context, e.g. what they were seeing before affects how they respond to white. But what does it mean that we see yellow, which we already cognitively know to be the opposite of blue? Well, this could means that our sensory neurons get used to (or adapt) seeing a certain colour. As they do so, they adjust their firing in response to this constant stimulation. In a sense, this is their ‘new normal’. So when you change from looking at blue to looking at a surface to what is normally white, the neurons’ equilibrium is shifted towards the previously seen hue, making white look yellow relative to this! As you’ve also experienced, these after-images are only temporary. Their brief duration shows how fast our brains can re-adapt to a differently coloured background. This enables them to encode information extremely effectively, as you can imagine.

Here, we analysed colour after-images together. We now invite you to become an independent vision scientist and go and explore interactive visual illusions in the largest scientific online depository, curated by Professor Michael Bach of the University of Freiburg in Germany https://michaelbach.de/ot/

After each illusion, an explanation is given of the visual factors that give rise to it, as well as some scientific literature, for those who are interested in delving further into the subject matter. Please be aware though that some of the illusions, especially the ones under sub-sections ‘motion’ or ‘luminance and contrast’ may involve images that may present uncomfortable viewing for some individuals. Those with visually triggered migraines or seizure disorders are probably safest at exploring the ‘colour’ section, which includes many fascinating illusions, including many recent social media virals such as #strawberry, #shoes and the internet-breaking #thedress.

Scotland is home to a vibrant community of scientists that study visual perception. One of them is Dr Jasna Martinovic from the University of Edinburgh. She is an expert in human visual perception, in particular colour vision, and will be available to answer any of your queries in relation to these illusions – please send along your questions or discussion points, remembering to mention which visual illusion they relate to, and at the end of the week Dr Martinovic will post a video with the digest of the answers.

Of course, the existence of visual illusions in itself is something that we can ponder. Why do they exist? A simple answer could be that they reveal a failure of our senses to tell us what’s really out there. But the majority of the illusions involve quite contrived setups, e.g. earlier we asked you to stare for a while at a coloured area and then look at a non-coloured area – something that you wouldn’t really do in normal life, as you look around things that surround you in everyday life. So a more insightful question would be that while it is also ok to think of illusions as revealing some sort of failure to see what is ‘out there’, more importantly they reveal something about the mechanisms of perception, or the short-cuts that our brain uses